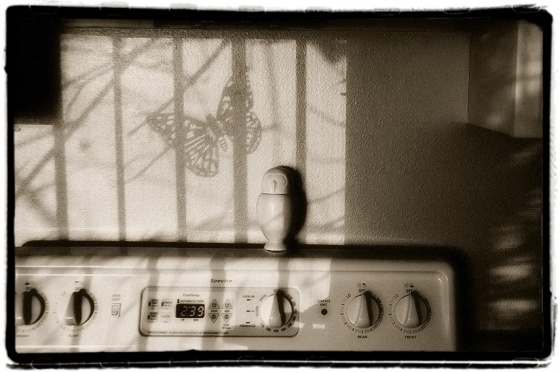 I like how light doesn’t play favorites.  For example, my new stove isn’t suggestive – at all.  A century from now, no one will long for the innocuous curve of its controls, nor find romance in the unremarkable typeface labelling its dials from High to Low, Bake to Broil.  Despite this complete lack of any visual distinctiveness, the afternoon light shimmering across the stove and the wall was so unexpectedly lustrous, I had to stop and marvel.  “My house has the most beautiful shadows, right now,”  I thought.

Then I went to get a butterfly.  It only seemed right to give the shadows something beautiful in return. 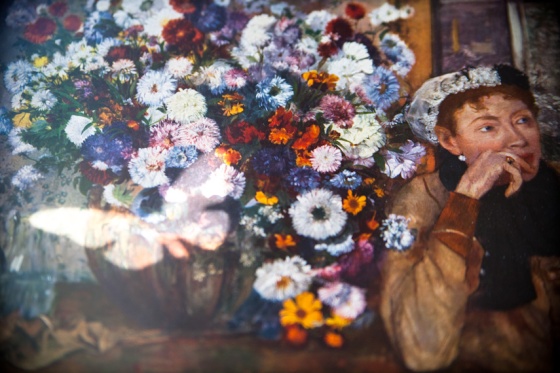 Oh,
she LOVED flowers and Degas.
So,
now she belongs to them
forever. 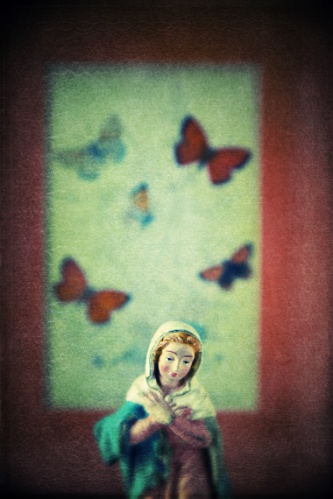 I really need to think this through a little more, the imperative miracle.  It seems to me it would take a miracle for so many things to happen in my life.  And I think “miracle” is synonymous with “impossible” in my mind, but that is too narrow for the majestic reality of the miraculous.  And why should I not deserve the impossible as much as any Butterfly?

I am living in an obstacle course, sharing my bed with curtains and carton lids and clothes I don’t have a place to put away (please don’t suggest the closet or I will scream).  The butterflies, and their belongings, are all Over There, on the opposite side of Mt. Bedpile, above the Great Barrier Closet and Prop Valley.  Reaching the butterflies is a challenge.  I weave my way to them, stepping around framed art and my tax records, but once retrieved – where to set them down?  How to make a place for the butterflies to become what they want – a discovery that needs room and time – when we are squeezed between the window and the bookshelf?

No one else may feel so tenderly towards this image as I do, but it is the dearest thing I have made in a long while.   It enfolds my world turned inside out, the proper order of things reversed but somehow more correct. I couldn’t have made this picture anywhere in my old home.  Living here will change how I see and – I have learned – that changes ME. 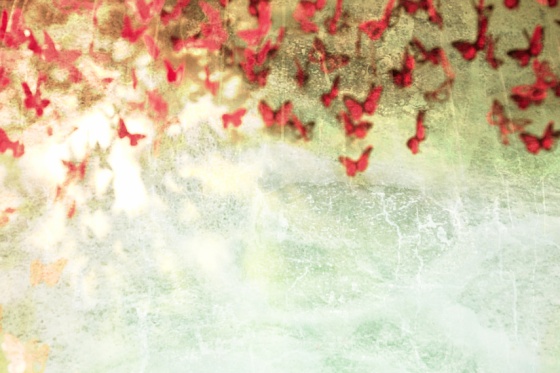 Its a very small apartment.
She loves it because it’s on a balcony that looks out into the woods.
But because it’s the oldest part of the building, things keep going wrong.
Anyway.
She complains about just everything.
It’s very hard for her to go out shopping with anyone.
She’s impossible to please.
I went out shopping for winter boots with her once.
We must have gone to 10 different shoe places.

She’s had a number of things happen with falls, and so forth.
She fell back in the fall.

Here’s an example of running her off her feet:
I took her to a movie one day.
The next day we went to a movie and we went to dinner.

But anyway, after one of these falls, we took her urgent care.
But anyway, she ended up in the rehab wing and she hated it, hated it,
but they wouldn’t let her go
because the physical therapy people wanted her
to have a certain amount
of arm strength for      you know      the walker.

There’s no fixing it. 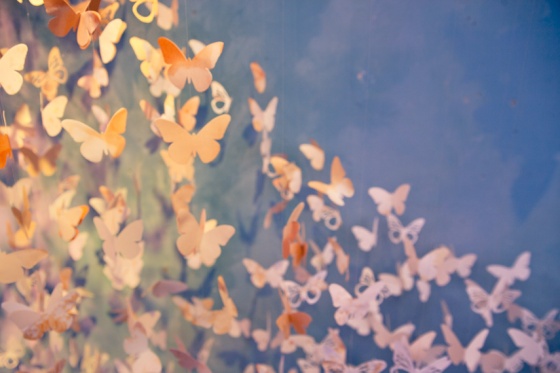 I really feel like having a rest today.  Then I think to myself, what will it feel like when I reach the destination?  And even as this thought illuminates the promise of something NEXT, I realize that not only don’t I believe in destinations, I would not be any further along, were I to reach one.  (If this seems a little inside-out, please refer to Winnie-the-Pooh.)

Nonetheless, I think I will take the morning off, and go somewhere the Things I Must Do can’t find me. Maybe some other accomplishing – down in the meaty places inside my bones, where something new is forming – demands a bit more time for its own purposes.  Here, what happens is not a destination – it is more like a song resonating with no reason to arrive, and no wish to depart.

I would be delighted if you would join me!

I think the light is a way for the butterflies to travel, drawing them to the next horizon – a path that fuels them with shimmer power. 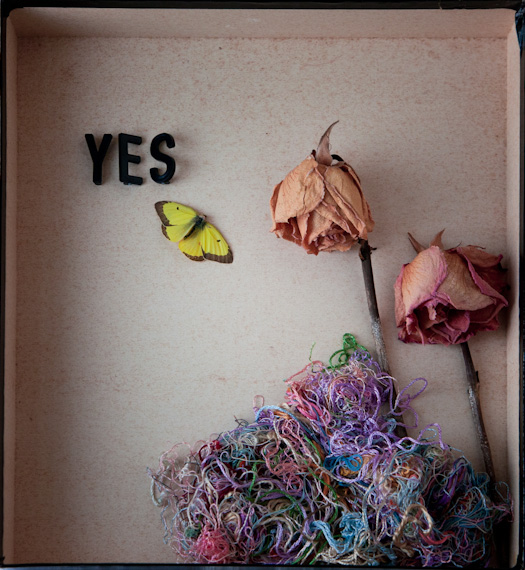 The butterflies followed me here, to my new home.  In fact, they keep following me everywhere.  It is a good feeling, being traced by butterflies.  But I have questions:

How much will do butterflies exert against the currents of the breeze?  They seem so insubstantial, and yet they alight on the flowers they need to find to live.  Are they just along for the ride, doing the best they can, lucky to be born in a large field of milkweed, so that no matter how fickle the invisible currents, a meal is always nearby?  Or are they dancing with a partner who spins them joyfully into a fierce unknown?

Or are butterflies and moving air one and the same?